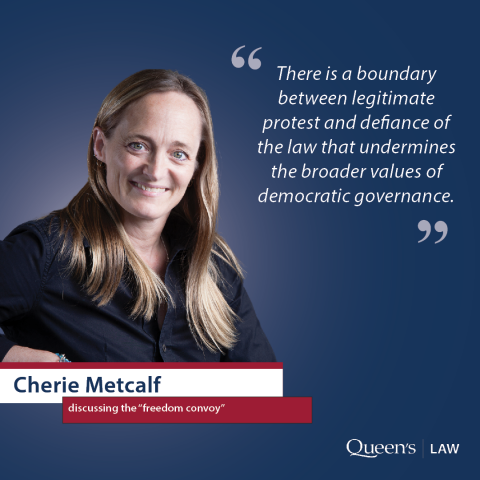 As the “freedom convoy” continues in Canada, Professor Cherie Metcalf shares her constitutional law expertise on constitutional freedom of both expression and association and the justifiable limitations to those commitments.

Even before the Charter of Rights and Freedoms entrenched constitutional rights to freedom of expression and association, the Canadian Supreme Court recognized these as implicit structural features of Canada’s democracy. The ability for individuals to collectively and openly criticize government is an important foundation of democratic government – even (maybe especially) when it is unpopular. Section 2 of the Charter protects this right, and the Supreme Court has given a “generous and liberal” interpretation to the expression that is protected. The value of the speech – whether it is good public policy, based in science, or accepted by the general public – is not a condition for its protection under the Charter. To the extent that the “freedom convoy” has involved peaceful protests to convey political messages and criticism of pandemic law and policy – it reflects this constitutional commitment. A noisy public “marketplace of ideas” that allows individuals to “search for truth” through open debate is an ideal of Canada’s constitutional democracy. This ideal is not something we should cast aside lightly – even if we might profoundly disagree with some of the messages it allows individuals to send.

A peaceful protest where individuals convey discontent with pandemic policy, public health restrictions, vaccine mandates and even express unscientific opinions can be seen as a “good” of Canadian democracy.

While the rights under Section 2 of the Charter are vital to Canadian democracy, the Charter, and the Supreme Court of Canada (SCC) both explicitly recognize that no right is absolute. In Section 1, the Charter states that the rights it protects are subject to limits “demonstrably justified in a free and democratic society.” In explaining why constitutional rights can be limited, former SCC Chief Justice Brian Dickson pointed to our broader commitment to a set of foundational values inherent in our democracy. Among these, he named: “respect for the inherent dignity of the human person, commitment to social justice and equality, accommodation of a wide variety of beliefs, respect for cultural and group identity, and faith in social and political institutions which enhance the participation of individuals and groups in society.” Under the Supreme Court’s Charter jurisprudence, government is seen as having both a right and responsibility to balance competing rights and claims in pursuit of these larger objectives.

When it comes to Section 2b rights, both the courts and government have recognized numerous justified limitations. Expression through violence has always been excluded from the scope of the Charter’s constitutional protection, and threats of violence are also now clearly outside Section 2b. Freedom of expression does not include an unlimited right of expression in any particular place. The right can “run out” when there is a fundamental incompatibility between the expressive activity and the place it is being carried out. Aspects of the “freedom convoy” protests that involve relentless noise, harassing residents, vandalism or destruction of public property, and rendering public infrastructure unusable would all easily be justifiably limited, or lie outside the scope of the right. There is no space under a constitutional banner for “freedom” to threaten or engage in violence.

Protests often involve some transgression of the law – especially if they are targeting particular laws as “unjust.” While government can show some flexibility, there is a boundary between legitimate protest and defiance of the law that undermines the broader values of democratic governance. Protests that shade into unilateral demands backed by even implicit threats of violence stop being democratic debate.

While space for legitimate political expression is something that the “freedom convoy” might claim, many aspects of the protest are now falling outside the scope of that constitutional right. Governments have a responsibility to enforce limits on expression, especially those already reflected in justified existing laws.

There are certain aspects of the evolving “freedom convoy” movement that are simply incompatible with the rights and freedoms in the Charter and our broader democratic ideals.

The inclusion of individuals who openly display swastikas, or confederate flags taints the protest with endorsement of racist and hateful ideas that deny the freedoms and equality of others. The message matters for constitutionally justified limits on expression. Messages like these that seek to undercut the rights of others conflict with the purposes of Section 2b, taking us farther from any search for truth or public debate consistent with our commitments to equality and human dignity.

The mobilization of millions of dollars to support the protests, that appears to draw on foreign supporters and far right groups promoting division and partisanship for their own ends, is a deeply concerning element of the “freedom convoy.” Limits on political advertising by third parties have been upheld in Canada, based on concern that unlimited spending will lead to monopolization of debate. The megaphone unlimited money buys can also magnify the harms of low-value speech.

These influences are potentially corrosive to Canadian democracy and the freedom it provides us. The “freedom convoy” has exposed the extent to which the modern environment in which expression takes place is controlled by money and private platforms that are largely self-regulating the activity they support. This raises serious questions about how we should understand the scope of constitutional “free expression” or “freedom to associate” through financing when they take place in these largely private, poorly regulated arenas. The consequences for Canadian democracy can be severe. As a country, we do not currently share the deeply partisan divide of our U.S. neighbour, but we should not be complacent. The “freedom convoy” highlights the need for Canadian governments to get much more serious in addressing these threats to Canada’s democracy.

Professor Cherie Metcalf specializes in public law and constitutional law, in addition to law and economics, and international environmental and resource law. She is the recipient of a grant from the Social Science and Humanities Research Council of Canada her project on “Institutions for effective Climate Change Action” that studies the role for institutions in limiting political polarization in Canada and the U.S.

Professor Metcalf’s insight is the second in a three-part series.
Read Professor Beverley Baines’s insight “Being ‘fed-up’ is not a constitutional right.”
Watch for Professor Erik Knutsen’s insight on civil litigation.

‘Freedom convoy’ – the good, the bad, and the ugly constitutional aspects