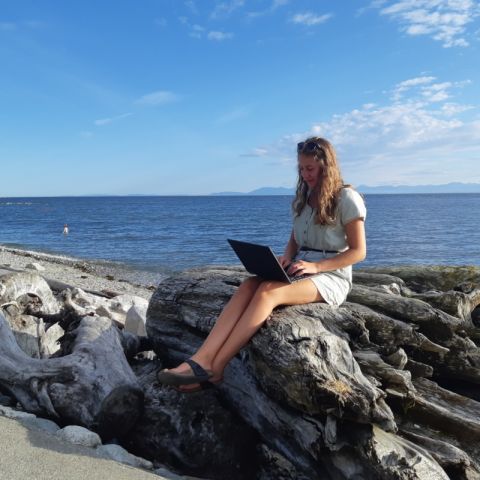 Immediately after Alyssa Johnson, Law’22, learned about extra-territorial jurisdiction and the laws of occupation at the e-Castle this spring, she began to apply these concepts. For her, completing the Public International Law program from her home in Vernon, B.C., was a springboard to a remote summer internship with the United Nations Relief and Works Agency for Palestine Refugees in the Near East (UNRWA).

“Israel is the occupying power, but also extends domestic legislation to Jewish people in occupied Palestinian territory,” she explains. “These legal regimes have significant consequences for Palestinians as they provide different rights in comparison to constitutional rights. These rights have been very important to understand in most of the projects I’ve done for UNRWA as they provide the context for public, scholarly, and UN Security Council debates about the Israel-Palestine issue.”

UNRWA focuses on providing assistance to Palestine refugees until a just solution can be achieved. Two major focuses have been annexation and how UNRWA can improve the delivery of its services. “Many of my projects have focused on various scholars’, experts’, and UN representatives’ analyses of annexation,” says Johnson. “I have also researched associated UN organizations so that UNRWA is better equipped to liaise and deliver targeted services in the future.”

Over the past eight weeks, Johnson has been sharpening her legal research and writing skills as she assisted two teams within the agency’s Department of Legal Affairs. For the international team, she conducted research and wrote a number of briefing documents on the work of associated UN organizations and on lecture series following annexation, and drafted policy documents. For the general law team, she drafted several types of contracts and completed a submission on behalf of UNRWA to the dispute tribunal for an employment case, likening the work to “creating a factum in domestic law.

“I was excited to intern with UNRWA not only to gain practical legal experience, but for the variety of projects and legal systems I would be exposed to,” she says. “UNRWA engages with the domestic laws of the host states and the international system, and the UN also has its own internal employment regime.”

Throughout her internship, Johnson typically had at least four projects ongoing at once. “The biggest things that I have learned are how to manage my time to meet the deadlines and to prioritize projects that are most important and most difficult,” she says. “Practising law in any jurisdiction will come with a lot of work, and I appreciate developing these skills and getting accustomed to the workload now.”

It was during her Public International Law studies in May and June – traditionally offered at the Bader International Study Centre in the U.K., but delivered online via the e-Castle this spring due to COVID-19 – that Johnson had the opportunity to learn more about working with UNRWA. She completed International Protection of Human Rights and Refugees, a course co-taught by Professor Ardi Imseis, who is also the Associate Academic Director of the International Law Programs. Previously, he served in senior legal and policy capacities with the UN in the Middle East (UNRWA and the UN High Commissioner for Refugees). “I reached out to Professor Imseis several times over the summer and has been a great resource for me,” she says.

In addition, at an online Careers in International Law panel, Johnson met Patrick Cronin, Coordinator of Human Resources Policy and Internal Justice with the World Health Organization in Geneva. He spent 10 years working with UNRWA in a variety of legal and human resources positions.

Following her summer experience, Johnson highly recommends internships to her fellow students. “Internships are a great way to practice the skills learned in class, explore your interests, and gain connections in that area of law,” she says. “I especially appreciated the support of the DLA team and the opportunity to engage with the international legal system.”

Alyssa Johnson was one of five Law’22 students who participated in a summer internship following spring-term studies in the International Law Programs. Incoming first-year students can learn more about these programs at an online information session to be held in late September.