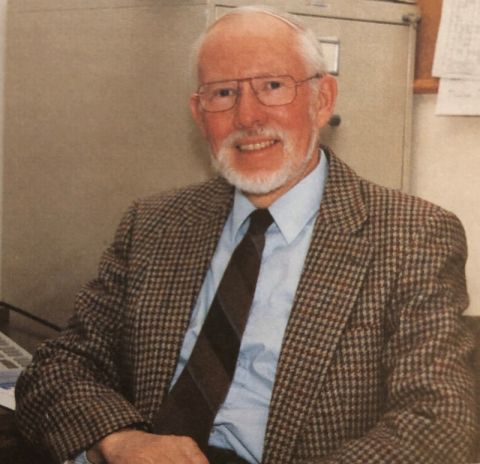 Professor Gordon Bale, Law’62, shown in 1995 in his office at Queen’s Law. Over three decades as a faculty member with his alma mater, he influenced scores of students and academics.

After earning his law degree from Queen’s in 1962, Gordon Bale returned to his alma mater as a faculty member in 1964. Over the next 30 years, he influenced scores of students and academics. He passed away on June 26 at the age of 85.

“Professor Bale was a brilliant teacher and legal scholar,” says Dean Mark Walters, Law’89. “The range of his research was impressive – from tax law to constitutional law to legal biography. He was a prominent and respected member of Canada’s legal history community.

“I was fortunate to have been a student of his in three courses,” Walters adds. “His careful, measured and thoughtful approach to the law was very influential for me.”

Before starting law school, Bale had obtained two degrees in economics – a BA from the Royal Military College (RMC) and an MA from McGill University – and then taught at RMC. From Queen’s Law, he went to the London School of Economics and completed an LLM.

At Queen’s, he taught courses on taxation, torts, wills, trusts, estate planning, legal history and the conflict of laws. One of his best-known publications was the 1991 biography, Chief Justice William Johnston Ritchie: Responsible Government and Judicial Review.

Bale’s principal area of scholarship was in taxation, which is the primary research focus of one of his former students, Professor Art Cockfield, Law’93. “Professor Bale was an inspiring teacher and tax scholar,” says Cockfield. “He was a big influence on my decision to become a tax law professor, and I remember him fondly.”

Professor Nick Bala, Law’77, is another former student and then colleague of Bale’s. “Gordon Bale had a great breadth of legal scholarship, and wrote and taught in many areas. In the field of taxation, he not only had a deep knowledge of the complex rules of tax law, but he also was keenly aware of their social policy implications.

“While he had a delightful dry sense of humour, a friendly demeanour and great patience with students,” Bala continues, “Gordon could be very trenchant in his criticisms of the law-makers: both judges and politicians.”

Professor Emeritus Don Carter, Law’66, remembers his former teacher colleague as “having a brilliant mind and a gentle manner.”

Professor Don Stuart agrees. “Gordon had such a nice, gentle demeanour in all he did. He was always self-deferential. Yet he was always willing to assist and answer questions and give time to anyone. His scholarship was thorough and careful.

“My wife Pam and I fondly remember lovely warm and lively parties with Gordon and Maureen at their Treasure Island home on the lake,” adds Stuart, referring to the place where Bale worked steadily to transform what had been a rocky bare site into an idyllic waterfront garden.