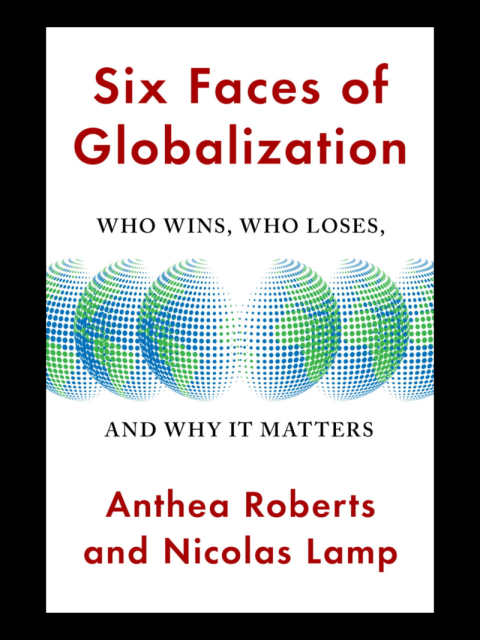 In Professor Nicolas Lamp’s book “Six Faces of Globalization,” he and co-author Professor Anthea Roberts of Australian National University discuss how there are many different possible perspectives that can be mixed and matched to create a more integrative way of seeing globalization.

What words come to mind when you think about globalization? Your view of how the world’s economies and cultures have become interconnected are likely influenced by whether you think these connections have been beneficial or harmful to you or your country.

Some may call to mind globalization’s positive effects like poverty reduction, reducing the cost of goods, and the ability to sample the best of other cultures.

Others with a less favourable view may focus on how globalization can cause job losses, diminish national sovereignty, or degrade the environment.

In their recent book, Six Faces of Globalization: Who Wins, Who Loses, and Why It Matters, Queen’s Law Professor Nicolas Lamp and co-author Anthea Roberts of Australia National University don’t try to convince readers about whether the benefits outweigh the costs or vice versa.

Instead, the two professors unpack six unique perspectives on globalization:

As the authors note, each perspective tells part of the story, but none tells the whole. The important question is how societies and their governments can gain an understanding of these narratives and find a way to resolve conflicts between the competing values that are foregrounded by the different narratives.

The clash between narratives came to a head in 2016, a strenuous time in global affairs. In that busy year, Donald Trump was elected president of the United States and the United Kingdom voted to leave the European Union. Despite the efforts of organizations like the International Monetary Fund (IMF) to stress the benefits of globalization, globalization’s cheerleaders did not find an effective response to the arguments made and values expressed by globalization’s critics.

“In order to really understand these competing narratives, we had to take them seriously as narratives that identify certain villains and heroes, that tell certain causal stories, but that also have a certain moral of the story that highlights specific values,” noted Lamp.

Identifying narratives and better shaping arguments is about more than creating a more productive debate, however. Distrust and feelings of unaddressed harms brought on by globalization have political consequences not just for the U.K. and U.S. The search for solutions is what prompted Lamp and Roberts to co-write the book, noting that – much like a six-sided Rubik’s cube – there are many different possible combinations of ideas and worldviews that can be mixed and matched to create a more integrative way of seeing globalization problems.

Six Faces was recently launched at a virtual Queen’s Law event where an interdisciplinary panel of Queen’s University experts discussed how lawyers, economists, and policy analysts can bridge the divides between different narratives about economic globalization.

“All problems in collective life are kaleidoscopic. Policy analysts need to see all the elements, and how they shift in relation to each other depending on your perspective,” observed Wolfe. “One of the book’s great strengths is showing us how globalization as a policy problem is like that too. Anybody who thinks that there is one right answer about…the challenges of globalization, and that they are standing in the right place to see that problem, is delusional.”

Karton noted the book captured an important nuance in the conversation around globalization: that each side seems more interested in promoting their own talking points and worldviews.

“Different camps seem to be speaking entirely past each other, not actually engaging with each other’s arguments but simply reinforcing their own beliefs by citing their “own” facts,” said Karton. “The book’s methodology shows a way toward at least understanding where others are coming from, and to finding overlaps or areas where common cause might be made. It doesn’t provide a solution to the toxicity of our current political discourse, but it does point out where solutions might be found.”

More information on Six Faces of Globalization can be found at sixfacesofglobalization.com.

The faces of globalization don’t see eye to eye