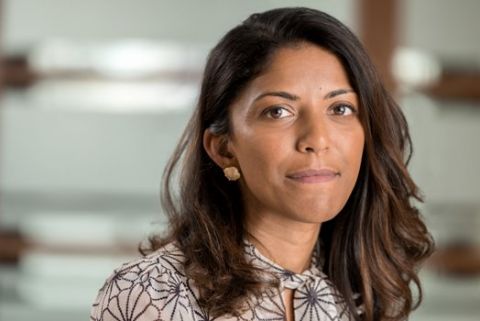 Professor Ashwini Vasanthakumar’s SSHRC-funded research project, “Transitional Justice as Transnational Justice: partnering with diasporas to secure justice from afar,” will look at “what rights and responsibilities exiles have to the country they have left behind, as well as the responsibilities of their host country in facilitating justice for these individuals.”

Professor Ashwini Vasanthakumar studies the rights and roles of exile communities in a SSHRC-funded research project.

Thomas Merton once said, “Peace demands the most heroic labor and the most difficult sacrifice. It demands greater heroism than war.”

Many countries which have survived civil wars might relate to Merton’s quote. The battles, death, and destruction are terrible, and yet picking up the pieces after the fighting is done can be a similarly overwhelming challenge.

One of the unanswered questions during these internal conflicts is what to do about those who have fled or been exiled to foreign countries and settled there, also known as diasporas. These communities play different roles in their countries of origin: they might enhance economic growth, support resistance efforts, or try to resolve conflicts. When conflict ends and it is time to pursue transitional justice, it is difficult to determine what role these diasporas should play in those processes, and what rights and responsibilities they have in their home country.

This is the focus of Professor Ashwini Vasanthakumar’s Social Sciences and Humanities Research Council of Canada (SSHRC) funded project, “Transitional Justice as Transnational Justice: partnering with diasporas to secure justice from afar.”

“Through this project, I will look at what rights and responsibilities exiles have to the country they have left behind, as well as the responsibilities of their host country in facilitating justice for these individuals,” she says. “Transitional justice is challenging because it looks at how we right wrongs, rebuild society, and foster trust – it is both forward and backward looking.”

This is a tricky topic because oftentimes the exile community functions as an official opposition to the government back home. For instance, Chilean exiles in the 1970s sustained solidarity movements opposing the Pinochet regime. Others, like Iran’s Ayatollah Khamenei, were able to exploit their presence outside of the country to build support and claim power. These dynamics can create an adversarial and fraught relationship upon which to try and build lasting peace.

In her research, Vasanthakumar is focusing on the Sri Lankan Tamil diaspora in Toronto, Canada. The Sri Lankan civil war, which ended in 2009, was Asia’s longest running civil war and it created a large Tamil diaspora. She first became interested in the war through work she completed in her undergraduate degree and fieldwork with Tamil communities. “The Sri Lankan civil war illustrates a lot of the complexities in these cases, and this is what makes it interesting to study; it is also an ongoing situation, so there is greater scope for research to inform policy or public debates.”

Some general principles that Vasanthakumar seeks to confirm through her research is whether, for instance, there are general expectations that exile communities should have in these situations. Do they have a right to be “heard” by the government, should they have a say in how justice is administered following civil wars, and does the Canadian government has a role in facilitating this on behalf of exile communities it hosts? “Suppose the conclusion is that diasporas have rights to be involved in transitional justice,” she says. “The Canadian government has international obligations to promote peace abroad – could this be a way to fulfill those obligations?”

To inform her theory, Vasanthakumar will be conducting qualitative research among members of the Tamil diaspora in Toronto. Along for the trip will be two research assistants, supported by her $33,649 SSHRC grant, who will have the opportunity to build their interview skills with clients in need of justice. She also aims to present at several workshops and conferences at the conclusion of the project.

“While I am using the Tamil diaspora as a case study, with future research funding I hope to investigate other case studies and refine the theory,” she says.

Vasanthakumar is also writing a book on diaspora politics entitled, The Ethics of Exile: a political theory of diaspora, which is under contract with Oxford University Press and is based on her PhD dissertation.

Lasting peace from the outside in