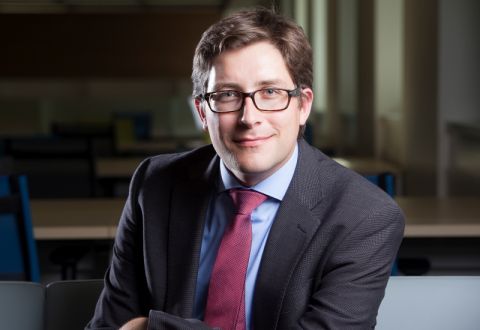 In Professor Nicolas Lamp's first five years at Queen's Law, he has founded and directed initiatives and has collaborated with his colleagues to produce opportunities that provide Queen’s grads with “a depth of expertise in international law that is unmatched by other Canadian law schools.”

When international trade law expert Nicolas Lamp joined Queen’s Law in 2014, he was eager to build on the school’s existing strength in his area of study. He came with an impressive track record, having worked as a Dispute Settlement Lawyer at the World Trade Organization and armed with a PhD in Law from the London School of Economics and Political Science, where he completed his thesis on “Lawmaking in the Multilateral Trading System.” In his first five years, he has founded and directed initiatives and has collaborated with his colleagues to produce opportunities that provide Queen’s grads with “a depth of expertise in international law that is unmatched by other Canadian law schools.”

Tell us about how you came to be teaching at Queen’s.

My interest, broadly speaking, is in the global governance and the lawmaking that shaped globalization. That opened up the opportunity to do an internship and later to work at the World Trade Organization, which allowed me to gain practical experience as a dispute settlement lawyer. It also allowed me to spend some time with one of the premier international economic lawyers at Georgetown University in the United States.

Tell us a bit about your work at the Bader International Study Centre (BISC, the “Castle”) during the summer.

It struck me as unfortunate that students who were really interested in, say, international criminal law, were prevented from taking Professor Darryl Robinson’s course here if they had studied the subject at the Castle. So, what I set out to do was to reconfigure the courses at the Castle to reflect the fact that they were actually quite different from the courses that we offer here at Queen's.

We now have a new curriculum at the Castle that allows the students to get a broad overview of the field of international law and come back to Kingston to deepen their expertise in the subject matter that interests them.

Since making the change two years ago, what kind of feedback have you received from students?

That means that these students are leaving Queen’s with a depth of expertise in international trade law which is unmatched at other Canadian law schools. It is quite gratifying to see especially when they then go on to an international law career. It has been really great.

Let’s go a bit deeper into your expertise and your focus area.

My research interest is very much in the law that shapes the process of globalization and in particular the law of the WTO. When I looked for a PhD topic, I noticed that there was a lot of attention being paid to the dispute settlement system of the WTO. It is relatively easy to pick up a case and read it and analyze it. But what I found was not getting as much attention from lawyers was the lawmaking process. And so what I set out to explore was the principles and practices and techniques that are employed in the lawmaking process in the World Trade Organization.

I heard objections from some that this is not really law. But I think that lawyers have something distinctive to contribute to the analysis of the lawmaking process because they have a better sense of what the product of the process is and what requirements the product has to fulfill.

When I started my PhD, the last big negotiating round of the World Trade Organization was supposed to be finishing – this was in 2008. It still hasn’t been finished to this day. As the negotiations deteriorated, my PhD turned into an attempt to understand what had happened, and I dove into the history of lawmaking in the multilateral trading system to understand how these conventions, practices, and techniques which failed to produce an outcome had come about in the first place.

There’s a need for new rules. The world economy is changing, and digital trade isn’t something we talked about in the mid-1990s when the last round was concluded.

For a country like Canada, it is always preferable to negotiate these rules in a multilateral setting. To give you an example: the European Union has long had an interest in protecting additional geographical indications, which are essentially names for foodstuffs that are associated with places in Europe. Canada was able to resist this in the WTO because it was backed by a coalition of WTO Members.

The EU was able to put these protections in place once the WTO negotiations faltered and Canada started to negotiate bilaterally with the EU. Canada had to recognize geographical indications as the price of striking a deal with Europe.

Canada has traditionally taken a very active role in negotiations in the World Trade Organization and has been heavily reliant on that system to make up for the fact that, compared to the U.S., EU, and Japan, Canada is a much smaller player.

You have lived in Kingston for a little while. You’ve spent some time in the U.K., in Germany, in Switzerland and in the U.S. What's been your favorite place to live so far?

I really love living in Canada for the simple reason that it's very easy to feel at home in Canada even if you’re not from here. In the U.S., and even more so in Canada, there’s an assumption when you get there that you will become American or Canadian, respectively, in short order. People assume that either you are Canadian, or you will become one. It’s a very different conception of citizenship than we have in Europe.

Kingston is an easy place to live in … there’s not much of a commute anywhere and it’s a safe city. There are lots of cultural offerings. It’s been an amazing place to land, especially after moving around a lot with young kids.

Any research projects you’re working on now or on the near-term horizon?

When Trump got elected I was struck by the forces that brought him to power. It was easy for the international trade establishment to dismiss Trump because of his economic illiteracy and his bombastic style. But, clearly, he had touched a nerve. What I tried to do in a recent paper is to understand the different narratives about the winners and losers from globalization. What I try to identify is the elements of Trump’s narrative that appeal that resonate with voters.

One of the things that struck me about Trump’s narrative is that he talks about jobs as though they are people’s property. So, if jobs are shipped overseas, he says the jobs are being ‘stolen.’ Economists often view jobs as simply a way to earn a living and if you lose your job you move on to another one. But there are certain jobs, particularly jobs in manufacturing communities, where the job is tied up with the individual’s sense of identity and with the viability of the entire community.

This jobs-as-property metaphor struck me as something that’s quite powerful about the way in which Trump talks about trade. The establishment does not fully recognize those non-monetary aspects of work.

This is a project that my co-author, Anthea Roberts, and I are now expanding into a book which will look more broadly beyond the trade context into the different narratives that are out there about the winners and losers from economic globalization.

I like to play the piano. I read a lot of non-fiction. What I really enjoy about my latest project is that it’s allowed me to read books that I want to read anyway.

Otherwise I work in the garden and play soccer with the kids.