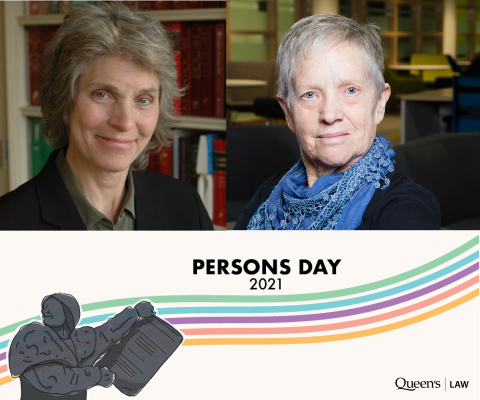 Professors Kathleen Lahey and Beverley Baines, both instrumental in shaping equality rights in Canada, explain the importance of the Persons Case for women and for many other marginalized groups in the country.

Today is Persons Day in Canada, honouring the “Famous Five” women who won a landmark case at the country’s highest appeal court 92 years ago. They successfully challenged the Constitution’s narrow interpretation of “persons” that precluded women from being appointed to the Senate. This “Persons Case” planted a living tree from which gender equality rights would grow. Professors Kathleen Lahey and Bev Baines, Law’73, explain the importance of the case as a living tree.

“The Persons Case is the tree trunk that was planted with deep roots in 1929,” says Lahey. “Since then, it has sprouted branches of concepts that have enabled judges to find a lot of parallels, applications, extensions, and implications in cases involving a wide range of legal provisions and social norms constructing women’s inequalities in Canada in the past – and even today.”

The right to be appointed to and sit in the Senate, Lahey says, “was just one legal ‘incapacity’ that made up the non-personhood of women. But if denying women the right to sit in the Senate was a component of personhood, then so would be denying them other civil rights.”

As an early example, many women entered the workforce during World War II but lost their jobs once the war ended. “They proved they could do the work and that has led to extensive litigation on what persons have the right to be employed,” says Lahey.

Culture change picked up momentum in the 1960s, an important decade for women’s rights. “Women were on the streets alongside men protesting issues ranging from military engagement to racism and sexism, and expecting to have political voices,” recalls Lahey.

While the next major milestone took place in 1982 when Canada entrenched its Charter of Rights and Freedoms for all Canadians, the months leading up to it were critical for women. Taking centre stage in the struggle to ensure the Charter’s inclusion of gender rights was Baines, a leading feminist advocate who had returned to her alma mater as a faculty member in 1974. (Watch for a feature story on Baines’ involvement with the Charter next April on Law Day.)

Lahey speaks about the specific provision for gender equality under Section 15 on equality rights. “Section 15(1) was put in at the last minute to preserve the essence of the Persons Case, which continues to lie at the heart of all of the most important gender decisions that have unfolded,” she says.

As Baines recalls, it was a 1980s case that marked the turning point in Canadian law that caught her attention. “My eureka ‘persons’ moment happened in 1988 when the Supreme Court of Canada decided to strike down the criminalization of abortion in the Morgentaler decision,” she recalls. “That decision was the ‘persons case’ for my generation.”

There is another dimension to the living tree and Lahey explored it in 1999 when writing her book, Are We ‘Persons’ Yet?: Law and Sexuality in Canada. “I discovered that not only are the living tree doctrine and the concepts that led to it deeply embedded, but they are also highly useful to just about any other disadvantaged group in Canada, the U.S., and the U.K. – all of which were countries implicated by original U.K. colonial laws that defined women as not being ‘persons’,” she recalls.

One example of a specific application of the living tree’s deep roots in Canada stems from an 1850 law that denied large numbers of Indigenous groups and other individuals many of the legal capacities that construct the non-personhood of women. Many Indigenous men and women, and non-Indigenous women, for example, were denied the right to vote, the right to file for a divorce, or the right to inherit. “The laws pertaining to who is a person denied women all of these civil rights,” explains Lahey. “In litigation – that in some cases did not begin in earnest for more than a century after discriminatory laws had been enacted – the Persons Case looked at those denials of human capacity and legal capacity, which were what made women non-persons in Canada.” Ultimately, she points out, it was the reasoning behind the Persons Case “living tree” concept that gave it the substantive authority to, for example, permit Indigenous women to regain Indian Act rights that had been prohibited to them by that statute for decades.

The branches of the living tree have continued to form, grow, and form the legal and constitutional grounds for recognizing and protecting the rights of many other marginalized groups in Canada. For example, when cases challenging legal and constitutional bars to same-sex marriage were brought in the early 2000s, Lahey became involved in litigation all the way to the Supreme Court in Canada – successfully. “We argued all of the points that denying same-sex marriage is a denial of being classified as a legal person,” she recalls. “If you are lesbian and gay and you want to get married, and if you want to adopt each other’s children, or if you want to be the parent of a child that was born through perhaps third-party interventions by an individual who is in a lesbian or gay relationship – those are persons cases, and they have given rise to the creation of yet another branch on this living tree.”

Despite progress toward gender equality since 1929, Lahey says, “It is absolutely clear that women still have not reached gender equality, hardly anywhere in the world. Just look at the stats: compared to men, women are still disadvantaged economically, socially, personally, as well as professionally in terms of paid work and unpaid work in informal sectors.”

While Lahey notes that there is still an immense amount of work left to do as new and emerging forms of discrimination based on personal or cultural characteristics continue to emerge, and will take a long time to address fully, she celebrates Persons Day for being the most important human-rights day Canada recognizes every year. “You always can rely on the Persons Case when addressing both new and old issues by tracing case law back to its origins that demonstrate how negatively some classes and groups of people are treated unequally. These are powerful arguments based on binding decisions that changed the role of equality in Canadian law, and they are arguments that should win in court – and do often,” she says.

Baines appreciates Supreme Court Justice Rosalie Abella for “keeping the Persons Case alive in September’s Toronto v. Ontario decision when she said, ‘Justices must remember to water the living tree.’ Her metaphor speaks volumes to those of us who still have to claim to be persons.”

Lahey appreciates what she calls “one of the most beautiful legacies” of the Persons Case: “It is very future-facing and it is never going to stop applying in Canada until we get to where we really should be.”