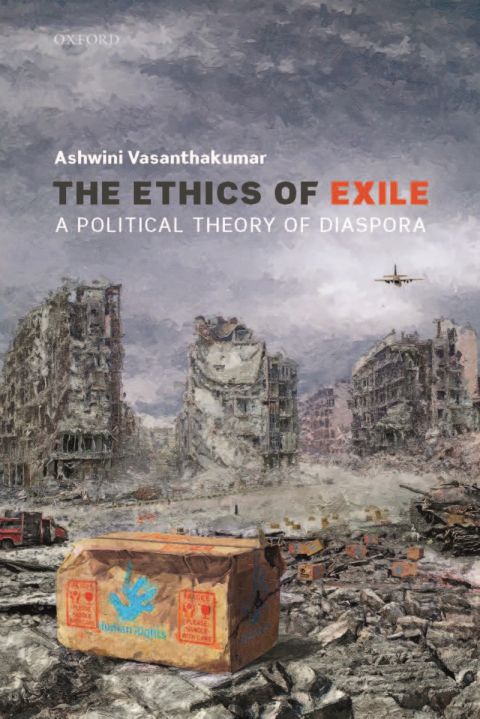 In “The Ethics of Exile,” Professor Ashwini Vasanthakumar dives deep into how exiles can be powerful political agents in diaspora communities that can play important democracy and justice-oriented roles from afar.

We’ve seen the pictures in the media. Long border lines of cars and families fleeing their homes. Overstuffed boats making perilous journeys. Men and women so desperate to escape they cling to moving airplanes.

But those helpless and vulnerable images don’t tell the whole story of refugees and exiles. Over many years, what begins as a trickle of people fleeing violence or persecution can pool into a diaspora – a community from a common place of origin settled abroad – from which likeminded individuals may try to bring about political change back home.

Studying these diaspora communities and their impact on the politics of their home countries has been a long-standing project of Professor Ashwini Vasanthakumar, and her recent book The Ethics of Exile dives deeper into the vital roles that diaspora communities can play from afar.

“The book shows that exiles can be powerful political agents and that they potentially play important democracy and justice-oriented roles back home.” she said. “These roles include bearing witness; challenging collective identities, especially by expressing marginal identities; building transnational solidarity movements; and representing those who are silenced back home.”

The book aims to provide a normative framework that could be helpful for examining diaspora politics more generally. To build this framework, Vasanthakumar uses case studies including Sri Lankan Tamils, Uyghurs, Chileans fleeing the Pinochet regime, and the Tibetan government in exile. Through these examples, she notes three central elements of exile: territorial absence, compelled by political pressure, but with an ongoing political orientation back home.

Out of these elements, exiles find purposeful roles that help them make progress on their political goals by testifying to what is happening in their country of origin, representing their viewpoint and those of their exiled community, and by engaging in principled disobedience directed at the government they oppose.

The process of writing the book has set the agenda for Vasanthakumar’s future research.

“Writing forces you to clarify your thinking. There’s nowhere to hide in a sentence,” she said. “The more I wrote, the more I discovered interesting problems that I’d need to go away and think about. For example, one of the implications of the book’s arguments is that exiles will, and are entitled to, play some political role in their countries of origin on an ongoing basis. One of the legacies of political conflict is that there might always be a community abroad with a stake and a say. This is especially acute in times of political reconciliation after conflict.”

While completing the book, Vasanthakumar was awarded a SSHRC grant to examine the role of diasporas in transitional justice processes through an innovative methodology combining fieldwork with normative theory.

Queen’s Law held a book launch on March 21 with a panel discussion that was moderated by Professor Grégoire Webber, Canada Research Chair in Public Law and Philosophy of Law at Queen’s, and featured panelists Professor Ardi Imseis of Queen’s Law; Professor Sarah Fine of the Department of Philosophy at the University of Cambridge; and Professor Eric Miller of Loyola Law School. Fine observed that Vasanthakumar’s account reiterates the importance of collective identity and politics, challenging the notion of exiles as rootless cosmopolitans, and Miller focused his comments on extending the book’s arguments to internal exiles, such as Black Americans and Indigenous peoples, forced to leave their homes.

Imseis noted the book challenges some surface level observations citizens might have on diaspora communities, where they can be viewed as outsiders or mere victims.

“Exiles form part of the conventional body politic, are as much a part of its normative frame as those born into it, and are therefore more than mere mysterious others always on the outside looking in,” he said. “The essential thrust of the book is to take exiles seriously on their own terms, as agents with rights and responsibilities, and in particular with responsibilities to those they left behind.”

With the book now launched, pandemic restrictions relaxing, and her sabbatical nearing its conclusion, Vasanthakumar aims to start her work on transitional justice in earnest and turn her attention towards her next book, which looks at the ethics and politics of resistance.

The Ethics of Exile: A Political Theory of Diaspora is available from Oxford University Press.

Watch a video recording of the panel discussion in support of Professor Ashwini Vasanthakumar’s book.

The fight for home